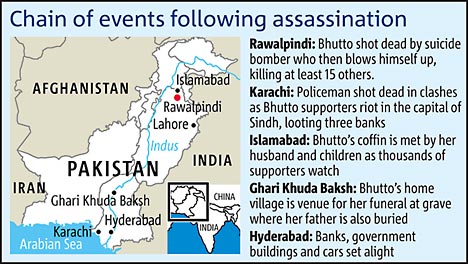 Last night I was passing by the main avenue when I saw some flickering lights in the distant. It was Pakistan peoples party office and the large portraits of Z. A. Bhutto and Benazir Bhutto were wrapped in the pitch darkness of the night. In the foreground were people with candles in their hands. It was a candle light vigil in memory of Benazir Bhutto.

Bhutto is the name for martyrdom in Pakistan. Benazir’s father, Zufikar Ali Bhutto was killed in 1979 by a hung decision of the supreme court (four out of nine judge declared him innocent). Then a few years later his younger son, Shahnawaz Bhutto was killed in a French riveria. Cause of his death remained a mystery till now. When Benazir became prime minister of Pakistan, her only remaining brother, Murtaza Bhutto was killed in a shoot out. Government agencies were callous enough to say that she ordered the killings. And now the final blow to the family and for Pakistan: Benazir was assassinated on the evening of December 27, 2007. Yesterday she was burried along side her father in Garhi Khuda Bux in the SIndh province and slogans were heard “we dont want Pakistan” “we dont want army”. Alas there is no one with the calibre of Benazir to stop this separatist sentiment. She was the only politician of stature and statesmanship who was gifted to hold the federation together. Now, after her, there is chaos and anarchy. More than fifty people have been killed and railway stations have been burned in the after math of this one killing. Army has been called in Sindh where the separtist sentiment is rising by the day. The political arena of Pakistan will miss Benazir for ever. There is simply no one with her subtle manners, high academic achievements, tolerant methods, liberal-democratic outlook, and above all the international recognition as a brave leader from the muslim world. Too bad that petty politicians like Fazlur Rehman and Pervez Elahi are all the stuff remaining and as the election date approaches, the nation is at a loss to be able to choose from this lot. Gone is the romance of Pakistani politics which was aglow with her name.

3 thoughts on “Bhutto’s death: A dream has vanished”

This site uses Akismet to reduce spam. Learn how your comment data is processed.

Its about Pakistan, the world, the people, culture, and books.

Be With Her Again
ہم سب

Bushra Mazher's Blog
thatpinkjournal.wordpress.com/
Foundation Operation X for languages, cultures and perspectives
A CUP OF COFFEE WITH YOUR CREATOR

WORDS TO ENCOURAGE YOU DAILY....TO ENCOUNTER LIFE WITH A NEW PERSPECTIVE